"Art is Life. So to Learn It, You Engage with Life" Mark Bradford on Teaching

By Annelisa Stephan on July 6, 2011 under Behind the Scenes, Education, J. Paul Getty Museum, Los Angeles 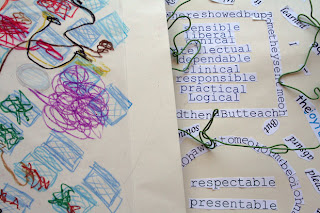 “What’s available on the surface isn’t all that’s there,” Mark told her. In other words, when you make art you find yourself—even if that wasn’t what you set out to do. That was the story for Mark, too. His thing wasn’t vertical lines or composition or intensity, but simply paper. “I’d always be picking up paper, picking up trash,” he told them. “At first I thought I was just cheap, but then I realized that was just me.”

The students wanted to know if Mark—whose work hangs in places like the Whitney and LACMA and who was officially declared a genius in 2009—ever struggles, gets stuck. Um…yeah. “I get mad! I get impatient!” He described a typical day in the studio, a roller coaster of emotions that included triumph, despair (break for lunch), resignation, and finally fragile equilibrium. He also talked about two paintings in his studio that he was struggling with, and admitted to throwing some in the trash. “I feel no different than you guys,” he said. “Every time I do a painting or a sculpture, it’s like it’s the first time.”

The 2:00 bell rang. “If I could pass something on to you,” Mark said, “It’s this: Keep going. Push through it. Try to step back. Don’t tear down your self-esteem. Bad painting? All right. Bad painting, good person.”
For the complete article, please visit:  http://blogs.getty.edu/iris/art-is-life-so-to-learn-it-you-engage-with-life-mark-bradford-on-teaching/
Posted by Lisa Powell, Business Development at 10:16 AM